The SSDM Award is awarded to researchers who contributed an outstanding paper at the past SSDM conferences.

Presented at the 16th International Conference on Solid State Devices and Materials (1984), Kobe

The Insulated Gate Bipolar Transistor (IGBT) is currently the leading power semiconductor device. During initial development, however, the IGBT had an intrinsic problem. Latch‐up phenomena, which were caused by the thyristor structure inherent in the device, narrowly limited the Safe Operating Area (SOA) for voltage and current. This paper proposed and demonstrated the first tangible solution in the world to this problem. The concept became the theoretical guideline for designing IGBTs commercialized in countries around the world. It can be said that this paper was the starting point for such practical implementation.

Around 1980, research was actively being pursued on the MOS‐controlled thyristor which an MOS gate turns on and off, to be the power semiconductor that would globally succeed the high‐voltage bipolar transistor. Among those efforts, the discovery that a horizontal MOS thyristor could operate the transistor (1978) prompted greater interest in development of a device structure that would realize the operation. However, these attempts were unable to solve the problem of the thyristor easily latching up on account of the PNPN structure with its alternating P‐type and N‐type layer arrangement, which was essentially inherent in the device structure. As such, no practically applicable device ever resulted. Amid the focus of much research on the flow of electrons, this paper showed that it was possible to formulate conditions triggering latch‐up by focusing on the hole current supplied by P‐type layer on the back surface of the chip and that, based on this, a design which would prevent latch‐up could be worked out. The outcome of this paper was that the SOA of the IGBT expanded significantly up to a practical level, opening the way for commercialization as well as developing rapidly on high power IGBTs for industrial motors and other applications.

Currently, the IGBT has been developed to handle even higher current densities (for home appliances) and its high performance has been realized at overwhelmingly low cost. This has made it a core device in fields applying power semiconductors. It has also been projected the IGBT will be a key device in CO2 reduction and renewable energy adoption. The IGBT market continues to grow 10% annually and could conceivably reach 1 trillion yen.

As explained above, the results of the research published in this paper have made a substantial contribution from a fundamental perspective to the development of industrial applications for the IGBT, the most important power device of our day, and the paper's great contribution has also been acknowledged from the standpoint of constructing device design guidelines that fully utilize numerical simulations. Therefore, the SSDM Award is presented to the authors of this paper in recognition of their achievements.

History of the SSDM Award

SSDM Paper Award is awarded to the best paper presented at the previous year's SSDM.

SSDM Young Researcher Award is awarded to the first authors of excellent papers presented at the previous year's SSDM. Authors who are 33 years old or younger as of April 1st of the year following the conference in which the paper was presented are eligible for the award.

Ryosuke Miyazaki
The University of Tokyo
Presentation No. F‐2‐02

Yu‐Chieh Chien
National University of Singapore
Presentation No. I‐5‐03

Shobhit Goel
The University of Tokyo
Presentation No. J‐2‐03

First demonstration of photoresponsivity in a polycrystalline Ge‐based thin film

The SSDM Award was established to recognize outstanding contributions to academic or industrial development in the field of solid state devices and materials.
Papers to be nominated for the 2022 SSDM Award should be among those that have been presented between the 1st SSD conference in 1969 and the 48th SSDM conference in 2016.

Notice : Self‐nominations are permitted. In the case of self‐nomination, at least one endorsement letter (any form is acceptable) from persons other than the authors of the paper must be submitted along with the Nomination Form. 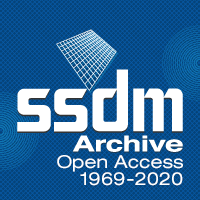